Amid the political upheaval, tragedy and celebrity deaths that 2016 saw around the world, Spain has had quite an unusual year of its own. Most notably, the December 2015 general election was followed by 10 months of unprecedented political uncertainty during which the country did not have a government. Given that these developments overshadowed the entire year, my five-strong list of Spain’s people of 2016 is dominated by political figures. Some have over-achieved, while one, in particular, had a year to forget. But all have been, in their different ways, individuals who have had a major impact on Spanish life. There is a glaring lack of women on the list, an indictment of Spanish front-line politics (only four out of 17 regional premiers and none of the main parties’ leaders are female). But the coming year could well see the likes of deputy prime minister Soraya Sáenz de Santamaría and Andalusian Socialist boss Susana Díaz step further into the limelight.

In ascending order, here are my Spanish People of the Year:

“Is Pedro Sánchez the Socialist messiah, or just a zombie who doesn’t realise he’s dead?” asked El Español newspaper a few weeks ago. It was a fair question. Less than two months earlier, he had been overthrown as Socialist Party (PSOE) leader in one of the messiest displays of political self-mutilation Spain has seen in its democratic era.

Sánchez’s 2016, like that of most frontline Spanish politicians, was dominated by the fallout of the December 2015 election and the June re-run that followed it, with all the plotting, bridge-building and tearing-out-of-hair those months involved. His downfall was spun by many critics in the party as the result of his willingness to sidle up to Podemos and nationalists in a doomed bid to form a rag-tag leftist governing coalition. But in reality, he had always been viewed with suspicion by the PSOE’s powerbrokers, particularly former prime minister Felipe González and Andalusia premier Susana Díaz, both of whom seem to have been responsible for unleashing the dogs.

Since his ouster, a revisionist version of events has cast Sánchez as the equivalent of the UK’s Jeremy Corbyn: an old-fashioned lefty trying to steer the party back to its principles. The 44-year-old economist himself has been all too happy to encourage such talk. “If the PSOE wants to be a serious governing party, it has to speak directly to Podemos, work alongside it in order to carry out the transformation and political change that the country needs,” he told La Sexta television, shortly after his resignation. To which it’s tempting to reply: Where was that boldness when you were in charge, Comrade? During the more than two years he led the party, it was hard to discern a clear Sánchez-inspired vision for Spain, beyond the fog of strategy and party intrigue.

Now he appears to be mounting a comeback. Sánchez 2.0 is driving round the country trying to drum up support for his vaguely subversive, apparently more radical, platform, a move that is inevitably winding up the PSOE’s bigwigs. He may never get his hands on the reins of power again, but Pedro Sánchez could at least make things uncomfortable for Díaz, whom many expect to walk into the party leadership job in the spring.

No, Sánchez is not a messiah, but this zombie isn’t entirely dead yet.

For a while, Íñigo Errejón was one half of the country’s most famous and fruitful double act. As the measured, slightly geeky deputy leader of Podemos, he seemed the ideal foil for the fiery Pablo Iglesias. Together, they plotted their party’s meteoric rise, from its inception in 2014, to the December 2015 general election, when it won 69 seats in Congress.

But in the uncertain months that followed, cracks in their relationship started to show. One of the year’s most memorable moments was when Errejón’s nodding support for Iglesias during a congressional debate melted into disbelief as the Podemos leader gratuitously reminded the Socialist Party that its hands were stained with the “quicklime” of state terrorism.

The party’s deputy leader was never convinced of the subsequent decision to team up with the communist-led United Left (IU), fearing the move would alienate Podemos’s more moderate electorate (arguably a concern that was borne out by the June election, when Podemos lost hundreds of thousands of votes).

In September, the disagreements between Iglesias and Errejón over strategy started spilling onto Twitter. “We already scare the powerful, that’s not the challenge,” Errejón tweeted in response to an Iglesias outburst. “[The challenge] is to seduce that part of our country that suffers, but which still doesn’t trust us.” Such clashes between the erstwhile Lennon and McCartney of the Spanish left seem to have dominated Podemos’s presence in the media and convey the image of a party on the verge of either re-discovering itself or of splintering apart.

Amid the confusion and despite his callow, Joe 90 image, Errejón has proven himself a formidable voice in national politics and a powerful influence inside his party.

What a difference a year can make. In January, Real Madrid were in a slump. Led by the unpopular Rafa Benítez, they were third in the league and playing like a bunch of strangers. When Benítez was sacked to make way for “B” team coach Zinedine Zidane, it appeared from many angles to be a desperate move. The Frenchman had limited coaching credibility and his promotion looked like a roll of the dice based purely on his aura as a player.

When Real Madrid lost at home to Atlético in February, apparently surrendering the league, Zizou started to look like yet another dead man walking from the most precarious job in football. And yet, after pulling themselves together since then, his players have put together an unbeaten run of 37 games and counting, which includes the Champions League and World Club titles.

The tonsured hero who not so long ago lit up the Bernabéu as a player now prowls the touchline, bald as a coot and wrapped in a stylish long coat. His success is sheer luck, some say. Anyone could coach a group of such talented superstars, mutter others. Whatever the secret of Zidane’s success, this purple patch will eventually have to come to an end and, let’s face it, some of his charges are hardly ambassadors for the game. But in the meantime, let’s enjoy the fact that such a graceful, modest man is flourishing in such a notoriously difficult post.

Thrown into the role of Catalan regional premier almost by chance, Carles Puigdemont has spent the last year bang in the middle of Spain’s deepest political crisis of recent times. The nationalist former mayor of Girona was plucked from near-obscurity in January to replace Artur Mas, a move that narrowly managed to salvage the separatist coalition which has been pushing for independence from Spain. 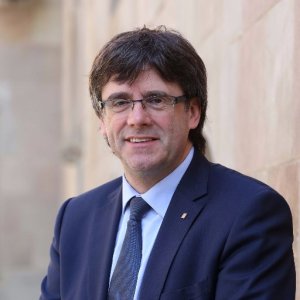 Many expected Puigdemont, who is the closest thing the Catalan secessionist project has to a figurehead, to be little more than a Mas puppet. But the mop-topped premier is different to his predecessor in two crucial ways: firstly, he is a life-long advocate of independence for Catalonia, unlike the “convert” Mas; and secondly, like many natives of Girona, he is known for a willingness to hear the other side’s point of view.

So far, that ability to negotiate has rarely been used on the unionists in Madrid. Instead, Puigdemont has been struggling to keep the more radical elements of the Catalan coalition on board as he pushes ahead with the independence “roadmap”. Meanwhile, his region has been facing seemingly endless legal action from the Spanish state – including a court ruling against Catalonia’s bullfighting ban, the arrests of activists who burned photos of the king, and a judicial summons for Catalan parliamentary speaker Carme Forcadell.

As the separatist front’s ambitious objective of an autumn referendum on independence comes into view, expect plenty more such conflicts. The Spanish government claims it now wants to reach out to Catalan nationalists, a move which could deflate separatist feeling somewhat. But for the region’s premier, a longstanding dream has become feasible.

Going into the December 2015 general election, who would have expected Mariano Rajoy to win that vote and its re-run, stare down his critics and make minimal concessions before managing to form a new government in October? Yet he has done all those things, in the process challenging the notion that Spain has embraced a new political era.

The leader of the Popular Party (PP) had arguably the most satisfying year of his career in 2016, a success built on his remarkable ability to remain still. Perhaps the most radical decision by this three-toed sloth of a politician came soon after winning the 2015 election – and characteristically it was a decision based on not taking the initiative – when he became the first election winner ever to decline the monarch’s offer to form a new government. And yet it proved a sound decision as his Socialist rival Sánchez got bogged down in his own attempts to form a coalition.

In February, Rajoy had been caught on camera telling UK prime minister David Cameron that “the most likely outcome is that there will be new elections on June 26”, and so he played his long game accordingly. Ignoring calls to step aside and unblock the stalemate, Rajoy sat tight, spoke disdainfully of the opposition’s attempts to offer an alternative and found himself making gains in the election’s re-run as many voters fled the unknown quantities of Ciudadanos and Podemos and shunned the increasingly divided Socialists.

These developments have led some commentators to paint Rajoy as a master strategist, cleverly plotting his adversaries’ downfall. That might be a little generous, given how the weakness and fragility of the rival parties and the rigidity of his own PP clearly favoured him. It’s also worth bearing in mind that Rajoy’s insistence on clinging to his party’s leadership without making an early bid to form a new administration was a major reason why Spain went 10 months without a government this year. His actions undoubtedly benefitted his personal position, but not the country’s interests.