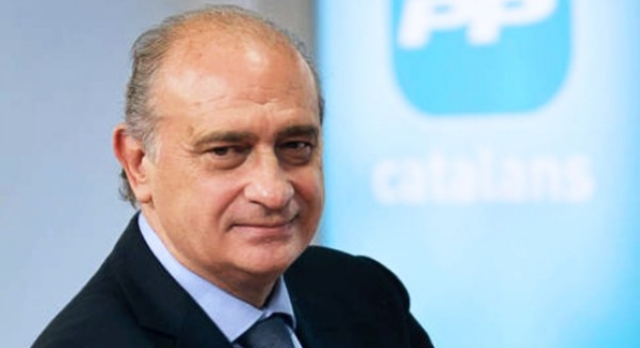 “Regeneration” is not the first word that comes to mind when thinking of Jorge Fernández Díaz and his recent bumpy ride from the interior ministry to the chairmanship of the public complaints committee in Congress.

On the contrary, the 66-year-old has become almost a synonym for the kind of old-school political caste that Podemos and others on the Spanish New Left abhor. As interior minister in Mariano Rajoy’s first term, his blinking, what’s-the-world-coming-to demeanour and penchant for belted jackets gave him the air of someone angrily at odds with the 21st century.

This is the man who, as head of one of the country’s most important ministries, repeatedly awarded a top police medal to the Holy Virgin in Málaga; the man who on one occasion compared abortion to Eta terrorism.

I’ve lost count of the number of times I have read, over the last few days, that Fernández Díaz is “a close friend of Mariano Rajoy”. The suggestion is that this is the only possible way to explain why he remained in the political front line so long and why the prime minister has tried to keep him there, despite mounting resistance.

To recap: Fernández Díaz lost the interior ministry portfolio when Rajoy announced his new Cabinet last month. This was not surprising, given that in June, audio recordings had emerged apparently showing the then-minister conspiring to smear Catalan independence leaders with fabricated corruption cases. Amid his own protestations that he is the victim of some form of witch hunt, Fernández Díaz now faces a congressional probe into his conduct.

But instead of silently slipping away from the limelight, Rajoy put Fernández Díaz forward as his candidate to chair the congressional foreign affairs committee. Despite an outcry on the part of Podemos and others on the left that the tainted former minister should be rewarded with such a prestigious job, he seemed to have enough backing to secure it. But the Socialists, after a last-minute panic attack, withdrew their support, reneging on a deal with the governing Popular Party (PP). Fernández Díaz was left clutching the short straw: the chairmanship of the public complaints committee, an appointment which does not require the approval of other parties.

It’s been a strange, irritating and sometimes vaguely comical episode which has highlighted Spain’s new-found fragmentation: it managed to make the PP and Ciudadanos look resistant to the political new broom, the Socialists indecisive and Podemos reliably outraged and rigid. But Fernández-gate also neatly reflects Spain’s current difficulties in embracing the slippery concept of “regeneration”.

“The old world is dying and the new world struggles to be born,” noted Antonio Gramsci, the Italian political theorist so fondly quoted by Podemos. And similarly, while Spain’s old two-party politics has been dying since last year’s regional and municipal elections, Rajoy’s return to power confirms that while the new world of transparency and a less aloof politics may be on its way, it hasn’t yet quite seen the light of day.

Fernández Díaz’s unedifying journey of the last few days was not a total defeat for him or Rajoy. After all, he did still end up heading a committee, even if it was a decidedly unglamorous one. But as well as confirming that the prime minister has a tin ear for the public mood, this story showed how hard it is proving to usher in the much trumpeted era of “new politics”.

The fact that a politician who appears to have put much of his taxpayer-funded time and money into smearing political opponents is even considered to chair any congressional committee is surely enough to rile even the most moderate Spaniards.

And yet, something is changing. It’s hard to imagine José Manuel Soria, who resigned as industry minister in April after his involvement in the Panama Papers was exposed, stepping down for the same reason just a few years ago. A political uproar subsequently prevented him from taking a plumb job at the World Bank in September at Rajoy’s blinkered behest. The mayor of Granada, José Torres Hurtado, also resigned in April due to his links to a property scandal.

Let’s not pretend this is a golden era of Spanish transparency. But the public and parliamentary mood has shifted, demanding more accountability of public figures, even though the system they operate in has hardly changed.

So Fernández Díaz’s shuffling, grumbling sort-of exit from the political arena this week could be counted as progress in the country’s long slog away from opacity and impunity. But it’s going to take a lot more than that before Spaniards can pop open the Cava and shout “regeneration!” without smirking.

Guy Hedgecoe is a freelance print and broadcast journalist who has been based in Madrid since 2003. Guy has covered Spain for the BBC, The Irish Times, Politico, Associated Press and Deutsche Welle and previously he was editor-in-chief of El País newspaper's English edition and founding editor of Spanish news website Iberosphere. Before living in Spain he worked as a journalist in Ecuador. View more posts